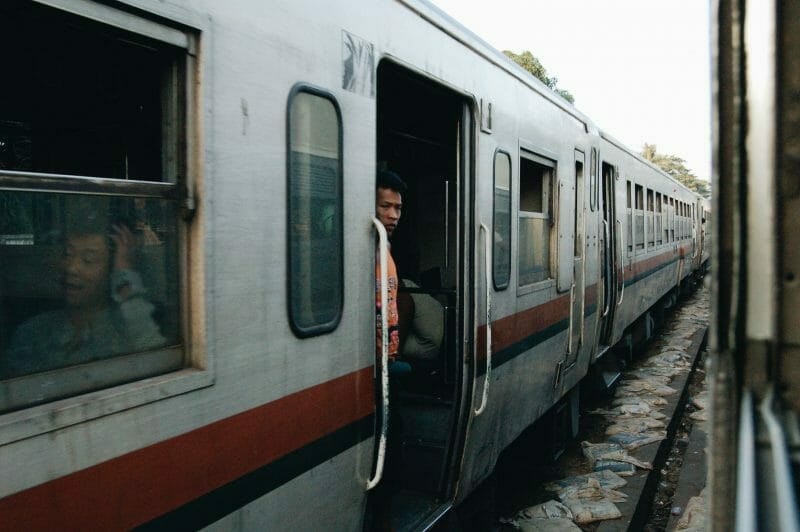 Taking the Train from Yangon to Mandalay: Photo Journal

Trains in Myanmar. You either love them or hate them.

After reading plenty of train horror stories, my Mom and I were a little apprehensive to travel via train from Yangon, but incredibly curious about how it would be. So what did we do? Buy train tickets to Mandalay of course!

We bought two tickets for upper seats (one class above the most basic class and one class under the sleeper cabins) for 9300 kyat each (that’s about $9.30).

Our train was scheduled for 5pm, but we were told to come at 4pm. The gates to the track were closed up, and at 5, the train came and the gates opened. A man helped us find our seats. Although most people I have come across in Myanmar are genuinely trying to be helpful when they come up to you, this guy expected 1000 kyat each person (about $1 each). These men sure go after tourists for some pocket money, so if you don’t want to pay up, avoid getting any help boarding the train. As frustrating as it was getting told to pay up, you have to remember that just $1 for us is pocket change, but it can go a long way here.

The train itself was pleasantly surprising. The seats were soft and they reclined to a comfortable angle (except for mine, which was broken). It was really warm at first, but once the train got moving, the fans went on and the breeze from the outside cooled us off.

Looking out of the train window out into the countryside, was simply elating. The countryside is such a stark contrast from the cities- an absolutely beautiful contrast. The sunset from the moving train was simply stunning. Words cannot do the feeling of watching the golden light fade into pink, then orange, then darkness, any justice.

Since we were only really going to the big touristy destinations, it was nice to see local, off the beaten track kind of villages throughout Myanmar.

The night on the train was a little less spectacular than the initial feelings experienced. Once it got dark, it was incredibly cold. The train would screech unbelievably loudly, and the car would jolt from side to side. I didn’t sleep a wink and I woke up freezing. My mom was in her down jacket and she woke up cold as well.

There are bathrooms on the train, and you get a free bottle of water! If you want food or snacks (or soda), people walk through the train and sell them. They also sell coffee, which is soooooOOOooo welcomed in the cold morning, but the train ride is so rocky, I can’t imagine not spilling it!

That being said, I loved the train. Sure, it was a sleepless night, but it kicked off our trip to Myanmar with great views and an unbelievable little adventure.