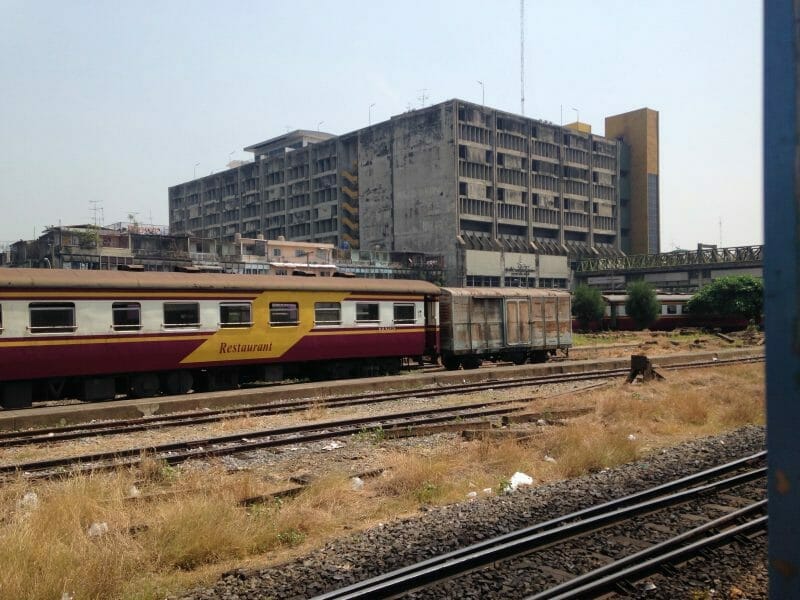 Border hopping is an exhausting, all day ordeal, but we’re in Cambodia and our day was quite the adventure! We almost missed the train from HuaLongPhong (Bangkok’s train station) to Aranyaprathet, but we made it on with 10 minutes to spare. The train costs 48 baht (about $1.40) and takes 4 hours (although it took us a little longer). The ride was long and very warm, but the breeze that ran through the windows into the train cars was refreshing and made the ride very comfortable. As I looked out the window, I saw miles of Thai country-side, a beautiful change in scenery from the crowded city.

Once we had arrived in Aranyaprathet, we took a tuk tuk to the border. It should cost about 100 baht or as low as 25 per person (if you find 3 others to share with), which is what we paid. Right as we were about to start driving, two other travelers asked if they could hop in, and of course we said yes. We all crossed the border together. I had read that crossing the border was a mess, full of scams and horror, but it was really easy. I mean, REALLY REALLY easy. Once you get to the border, you go into the market and follow the signs for the border. You get stamped out of Thailand, then enter that weird in between area. That area, neither Thailand or Cambodia, is where you can buy your visa on arrival. It’s also where you start speaking Khmer instead of Thai. To get a VOA (visa on arrival), you need $30 USD, a passport photo, and 6 months left in your passport. After getting your VOA, you get shuffled further down the road to the checkpoint, where you get stamped into Cambodia. Easy!

To get to Siem Reap, there’s a $10 public bus, but one of the travelers we shared the tuk tuk with got seats in a minivan for the same price. Looking back, we probably should have inquired a little more about the service to ensure it wasn’t a scam, but luckily for us, it ended just fine. The minivan left really late because some of the other passengers got stopped at the border, but the company treated us to beers in the meantime. After the travelers came, we headed off! The drive into SR takes about 2 and a half hours. 20 minutes into the drive, the beer had completely passed through me and I needed to pee SO badly that my eyes started watering. I finally mustered up the courage to ask if we could stop, and luckily at the same time, someone else turned to the driver and asked the same. Everyone in the bus piped in that they also needed to use the restroom, so it was a really well timed stop and we all chuckled at how maybe drinking a beer (or 4 for some!) was not the best idea before a long car ride.

We were dropped off near the night market and Pub Street at around 11:30 pm. My phone had died, but I had written down the address of our hostel, which was literally only “Next to the Night Market.” Jazi and I spent about an hour wandering in circles trying to find our hostel, and finally, I just went into a different hostel to ask for directions. Turns out the hostel I asked was our hostel’s sister location, and they pointed us in the right direction.

We’re staying at the Onederz hostel. It’s absolutely fabulous (and it’s on Bugs street if you ever need to find it). We got noodles at 1 am on Pub Street, then crashed.

Jazi and I had been setting daily alarms for reasonable hours in the morning, so we decided to give ourselves a break and just sleep in the next day. Turns out, we needed that sleep, as we didn’t get out of bed until about noon. After a quick $2 breakfast, we headed out to figure out the lay of the land. We had a lazy day, spending our time meandering around town and laying out near the rooftop pool- yeah, our $6 hostel has a rooftop pool. I love SE Asia. At nighttime, we went out near Pub Street for Indian food, then returned back to Pub Street for a cheeky little cocktail. I had a Pink Lady and Jazi had a passionfruit mojito. We walked through the night market in search of rotis, then went to sleep after successfully finding them.

The next day was busy busy busy! We returned home at about 12 midnight and were up by 4 am for a sunrise tour of some temples. We watched the sunrise at Angkor Wat. I had already seen the temples we went to, but seeing the sky lighten up the temple in a foggy light is always a beautiful sight. We saw 5 other temples which were all incredible, including the temple from Tomb Raider. Again, seeing them a second time was just as wonderful and incredible as the first. We got back before 11am, and since we were running on less than 4 hours of sleep, crashed for a little nap.

Jazi and I were incredibly lucky with our hostel dorm mates in Siem Reap. We met the loveliest girls, Sarah and Emily, who were both traveling independently and gave us tons of tips and recommendations. We also went out with Sarah and her two German friends, who were absolutely the sweetest. We decided to go out bar hopping, hitting Angkor What?, the most well-known bar in Siem Reap, and ended up at a local hip hop club. We were possibly some of the only Westerners, which I loved. Why travel and be surrounded by tourists all the time? I also tried some fried bugs, something I was really quite terrified of. I had a handful of fried crickets, a scorpion tail, and a bit of its body (that weirded me out), a bit of snake (it wasn’t bad but I really like snakes so I didn’t want to eat more of it), and TWO TARANTULA LEGS. When in Cambodia, I guess… No regrets though!

I’m heading up to Chiang Mai, Thailand next. I’ll see how long I want to spend up there when I actually get there, but right now, it’s a stopover on my way to Myanmar. I’m really excited to go there, as I’ve never been and I’ve heard Burmese people are the kindest, most wonderful people. I had to wake up at 9 to catch my bus to Bangkok (which is currently 50 minutes late, but what can ya do?), but I was awake much earlier- around 5 am- because some drunk man burst into our room, letting in a ton of light, then proceeded to go to a corner of our room and pee… Pleasant. After he had finished up, he actually crawled into Jazi’s bed… Yikes. Jazi spend the rest of the night in my top bunk, but I don’t think any of us in our room could really shake that and go back to sleep. Oh well, sometimes things happen. It was hilariously uncomfortable when he woke up and we told him what he had done, but the humor quickly faded when we all realized he was a complete jerk about it. He just kinda left, no cleaning up and no real apology, and then he came back about 20 minutes after he had initially left to ask if we would give him some of our bottled water because he was “a bit dehydrated” (no duh-he had just emptied all the water inside him on the floor of our room).  We said no and then he left for good, laughing it off.

I just found out the bus for Bangkok had already left without stopping here, so I was put onto the 12noon bus. That means that I have a little less than one hour for error or traffic… I probably won’t make the overnight train, but I’m not going to book a hostel room on the off chance that I do in fact make it!

Wish me luck, I’ll need it!