The Annapurna Sanctuary (the trek up to Annapurna Base Camp) was super interesting to me. Super weird! In the best and worst ways!
Being back at a (relatively) low elevation (1500 meters or so) meant for unexpectedly HOT days. Nathaniel and I found ourselves sweaty sweaty sweaty, but it started to cool down on our second day when we got to Sinuwa, 2360 m.
Our route for the sanctuary was Tadapani – Upper Sinuwa – Deurali – Annapurna Base Camp – Jhinu Danda – Siwai – Pokhara. Keep in mind that we were acclimated so we could do the trek pretty quickly! We probably could have shortened the trek even more, but eh gotta slow down to stop and smell the roses! Rhododendrons in our case, as they were in full bloom and beautiful!
I found the trek not so difficult until Deurali, which I found to be not so enjoyable. We decided to pack about 2 or 3 days (depending on your speed) into one day of trekking, which was totally possible, just tiring. It was so demoralizing being so exhausted and tired,  and being pretty far behind Nathaniel, who seemed to have no problem gassing it up the mountain, didn’t help. Even though we were cramming a bunch o’ kilometers in one day, I ended up, at one point, on the verge of tears. I had a stomachache, I was tired, I was slow… I was just not a happy camper/trekker. Everything seemed SO hard. Nathaniel was waiting for me at a high point and somehow got me smiling and laughing again. Bless him for dealing with me.
That night, to be frank, was awful. Horrid. Possibly the worst night of my trek. I woke up with the most intense stomachache and yeahhh, stomach bugs on a mountain + dirty squat toilets = not ideal. In the morning, after a very sleepless night for me, Nathaniel tried to get me up to Macchapuchchhre Base Camp, but I just physically couldn’t do it. I told him to continue up to ABC without me, that the next day, I’d wait for him in Deurali and we could head down the mountain together. I spent the day in bed. It was not the best or most enjoyable day, but hey, you get ill sometimes.
The next day came ’round and Nathaniel was back in Deurali (after successfully making it to ABC and spending the night there!!!) by half 9. He told me that I just HAD to go to ABC, that I’d regret it if I didn’t go, that he’d meet me in Pokhara in just two days’ time, so up I went, cursing his name the entire way up. At one point, as I was walking up a glacier, I met Homer and Nadav, the sweetest Israelis who followed me up the glacier until they realized that we were not on the route…. Oops. That’s what happens when Anya tries to navigate. We traversed over to the actual path (not on the glacier) and somehow didn’t slip! I spent the night sharing a room with them at Annapurna Base Camp.
I was super fortunate with the group I was with at ABC. There were two English Army men who had their 4 weeks of vacation after a long 6 straight months of work, the most wonderful school principal (Jennifer), the two Israelis, and a Swiss guy who had been EVERYWHERE and just sparked my wanderlust sooooo badly. He had just spent three months in Iran and UGHHH that is the number one place I’d love to go next, although not the most plausible.
We woke up for sunrise and wow. The views from ABC were stunning… A 360 degree view of the Annapurnas and mountains near them. Watching the sunrise, wrapped and cuddling in shared sleeping bags, was such an experience. It was one of those moments you’ll remember forever. 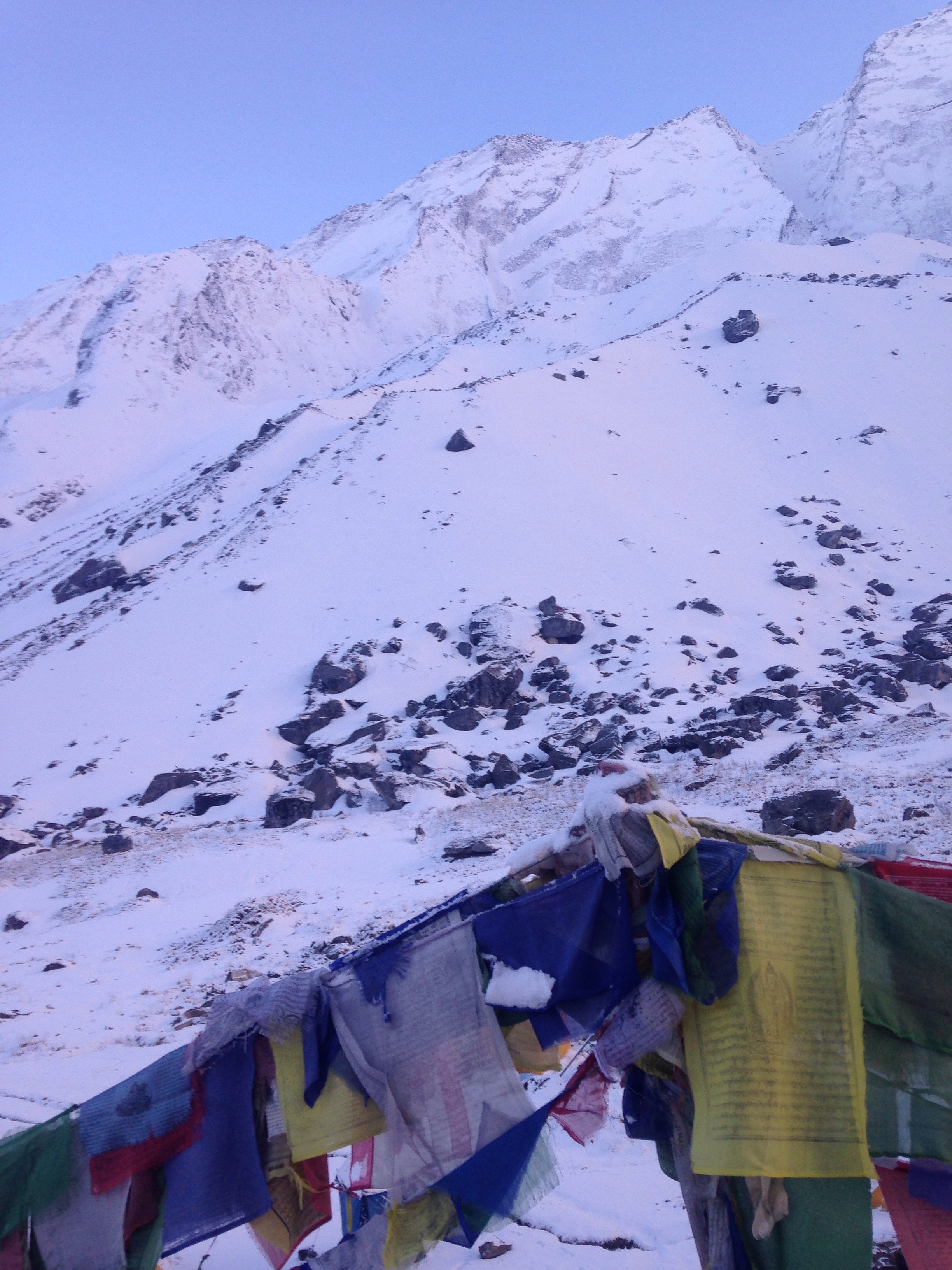 I rushed down the mountain in fear that I wouldn’t make it to Pokhara before Nathaniel left, and I only wiped out twice on the ice! I pretty much tripped over rocks the entire way down, though. I walked down to Chomrong with Jennifer, who was the most incredible company. It’s funny, I had only known her for under 36 hours, yet I left her feeling as if we’d known each other for ages. We clicked so so well and I’m so thankful I met her.
I continued from Chomrong to Jhinu Danda, famous for their hot springs. I arrived at around 5 pm (it was a LOOOONGGG day of trekking) and ate dinner with another English gap year guy who had spent the last month or so in India; his name is Alfie! He was super super sweet and such good company. We ate Oreos and other biscuits with the jar of peanut butter I hauled up to base camp with me, and made plans to go to the hot springs in the morning.
6am the next day and we were walking straight downhill towards the river for 20 minutes until we hit the hot springs! ugh soooOOOooooo good on the achey muscles, although walking back uphill in wet clothes was less than ideal… and cold. V cold. As a woman, I had no idea what to wear into the hot springs and settled on leggings and a T shirt. That seemed to go well/smoothly with the locals, and I was glad to be a bit more covered up, seeing that the hot springs are actually a religious site.

After changing and eating brekkie, I was off on my way to Siwai (pronounced see-way), the closest place I could get a bus to Pokhara!
I arrived in Siwai at around 10:30 am after a surprisingly long UPHILL walk. ew uphill. I grabbed a Coca Cola (treatin’ myself after 25 days or so of trekking) and some food (CHICKEN soup! After a month of vegetarianism!) and then went to the bus station…. shack… meeting point. There aren’t really schedules, despite what everyone tells you (all different times depending on who you ask), so I waited for the next bus, which arrived at half noon! Whilst I was waiting, I met a German man (who’s name I embarrassingly forgot), and we hopped on the bus together. Nothing brings you closer than being squished on a bus for 6 hours!!!
Man, talk about  an interesting journey. I don’t know how we fit so many people on such a small bus. People were sitting everywhere, even on the roof (which I would have preferred to inside the actual bus)! And hanging out of the doors and sitting on laps and just people EVERYWHERE. I had a child half sitting/half clinging onto me, and she was just the CUTEST. And then she leaned over and vomited everywhere yuccckkk. Gotta love the Nepalese winding roads!

German man and I arrived in Pokhara after what felt like waaAAAaay longer than 6 hours, then went to Lakeside and stopped at a cafe so I could text Nathaniel (#chasingwifi). Nathaniel swung by and picked us up, showing us to the hotel. A real hotel!!! With my own bathroom!!! And it only cost 300 rupees (I know, $3 USD, splurging!).
I’ll write about Pokhara & our adventures (and mishaps) there a bit later, it deserves it’s own post!
xoxo